Vice-Admiral John Charles O’Brien was the 13th Commander of the Canadian Navy. 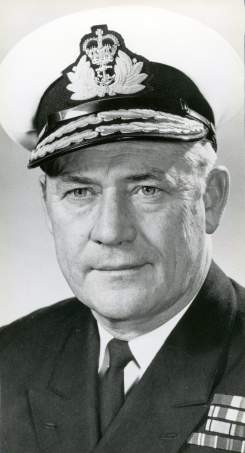 He returned to Canada in 1940 to serve in HMCS Saguenay. Specializing in communications, he took the Long Signals Course in England in 1942. From 1942 to 1946, he served in two roles:

In 1946, O'Brien was the Canadian representative on the RN Signal Book Revision committee. Later in 1946, he was given command of the destroyer HMCS Crescent. In 1948, he was made Officer-in-Command Communications School in Halifax, Nova Scotia. Later that year, he became Officer-in-Charge Officers Divisional Course at HMCS Cornwallis.

On promotion to Commander in 1951, he studied at the Royal Navy Staff College in Greenwich, England. Next, he was appointed Director Tactical and General Communications at SACLANT Headquarters in Norfolk, VA.

On promotion to Captain in 1955, O`Brien was made Director of Naval Training at NSHQ in Ottawa. Later in 1957, he was made Director Naval Communications. He became Coordinator Personnel Structure Committee in 1958.

In 1959, he assumed command of the aircraft carrier HMCS Bonaventure.

He was promoted to Commodore in 1961. He was then appointed Naval Member of the Canadian Joint Staff in Washington, DC. He was appointed Senior Canadian Officer Afloat Atlantic in Halifax, Nova Scotia, in 1964.

On promotion to Rear-Admiral in July 1966, he assumed command of Maritime Command in Halifax, Nova Scotia. Promoted to his current rank in September 1968, Vice-Admiral O’Brien served as Commander Maritime Command until 1970. He was then made Commandant of the NATO Defence College in Rome. He served in this position until he retired in 1973.